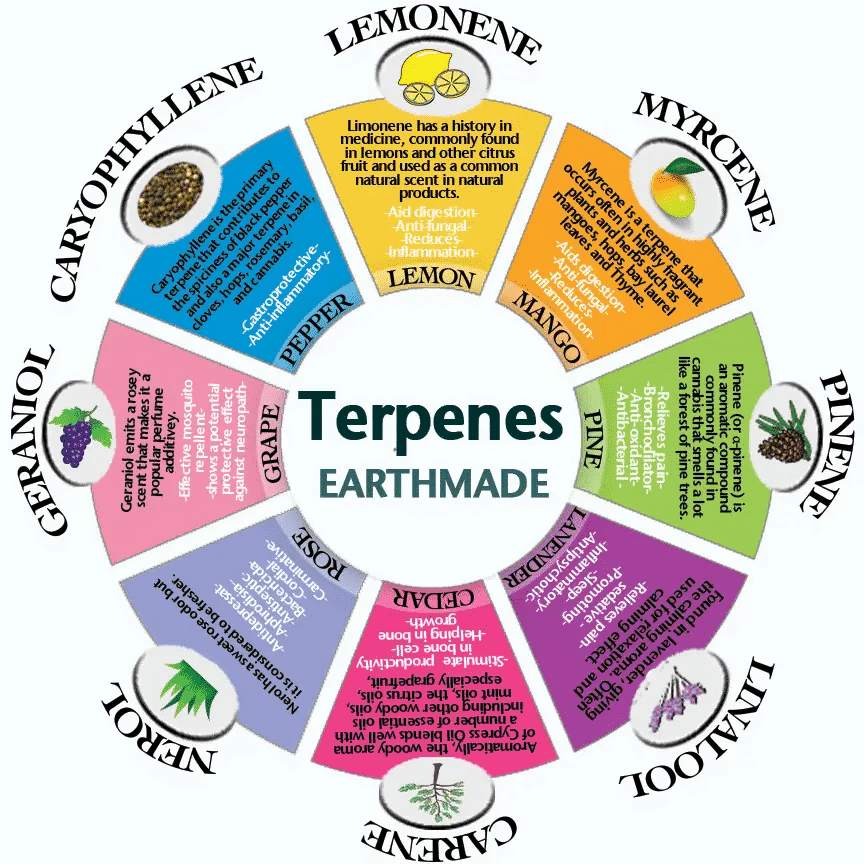 Terpenes and CBD oil - what you need to know

Question: What are terpenes and what role do terpenes play in the overall effects of CBD oil?

What are terpenes? And what role do terpenes play in the overall effects of CBD oil? This is a need-to-know topic if you’re shopping for CBD products. And, actually, it’s one of the most fascinating aspects of the medicinal effects of cannabis.

Cannabis has a distinctive smell that’s like no other plant on earth. In case you’ve never smelled cannabis, it has a peculiar turpentine- or diesel-like aroma and can sometimes smell a bit skunky. This aroma is the result of the copious production of compounds known as terpenes in the resinous flower clusters of the female cannabis plant.

Cannabis flower also produces a class of compounds known as cannabinoids. There are two particular cannabinoids that are found in the most abundance. These are cannabidiol, aka CBD, and delta-9 tetrahydrocannabinol, or THC. THC is the cannabinoid found in marijuana that causes a high. The CBD products that you can buy over the counter have negligible amounts of THC and do not cause a high.

Cannabinoids are essentially odorless and colorless. You can’t tell how much CBD or THC is in a cannabis bud by smelling it. But you can determine terpene content by a bud’s fragrance. This is because the various terpenes produced in cannabis each have their own particular scent.

Why do plants produce terpenes?

Most plants that you’re familiar with produce terpenes. Terpenes are the compounds that make citrus fruits smell citrusy and that makes pine smell piney and flowers smell flowery and spices smell spicy.

Knowing why plants produce terpenes can help us understand why they have effects on our bodies.

Terpenes evolved along with plants as a way to signal their presence and particular properties to animals in their ecosystem. For example, terpenes with flowery scents attract pollinators, while terpenes with diesel-like scents repel pests.

This is a neat trick. But this trick to work, terpenes need to have two specific properties.

One is that they must be very volatile. That means that they vaporize easily and waft through the air and spread out in the environment.

Just how powerful are terpenes? To give you some idea, cannabinoids are measured in percentage of the weight of a bud – say, for example, a good bud might be about 20 percent CBD or THC or a mixture of the two.

Terpenes, on the other hand, are measured in parts per million. So they make up an extremely tiny percentage of the bud. Your nose can detect just a few molecules of a terpene.

What are the effects of terpenes on humans?

Terpenes are what make up the essence of a plant. You might have heard them called “essential oils” at some point.

As we mentioned, terpenes can attract animals that pollinate and fertilize, and repel those that feed on plants. But do terpenes actually have physical effects on humans? You bet!

Terpenes have been used in a healing modality known as aromatherapy for thousands of years. Terpenes are, in fact, the first medicines known to man.

Interestingly, not only does each individual terpene have its own distinct scent, but they also have different effects on the human body.

For example, linalool, a terpene found in lavender, is known to help people feel more relaxed. Pinene, a terpene produced by pine trees, and citrine, found in citrus fruits, have an energizing effect. And caryophyllene has a spicey aroma and produces an uplifting effect.

It’s not hard to see now that the effects of a CBD product greatly depend on which terpenes, if any, are part of the formula.

The combined effect of the cannabinoids and terpenes found in a CBD product is known as the entourage effect. An entourage is a group of people that travel together for a specific purpose. The people in an entourage interact with each other in different ways. Replace one of the people and you will have different results.

The same goes with cannabinoids and terpenes. The effects of a CBD product depend on which terpenes are in the entourage.

So, in order to purchase the right product you need to know three things:

These CBD formulations are known in order as:

To understand the difference between these products you need to understand how they are produced.

Full-spectrum CBD oil is produced by extracting, filtering, and refining the natural oils produced in hemp flowers. It contains the exact same terpenes found in the original plant from which it was extracted.

Because each strain of hemp produces a different blend of terpenes, the outcome depends entirely on which strain is being used to produce the CBD oil.

The extracted oil can be further refined to produce 99-plus percent pure CBD. This purified CBD can then be dissolved into a vegetable oil base such as coconut oil.

The fact that purified CBD is odorless and flavorless makes it ideal for use in edible products as well as topicals and cosmetics.

A CBD-infused oil can also be infused with specific purified terpenes in order to produce specific effects.

Given the examples above, adding linalool to a product makes it ideal for relaxation purposes. And adding caryophyllene can help improve mood.

How do you know which CBD product to buy?

When shopping for CBD products, the first thing you want to consider is the goal. Why are you planning to take CBD?

Full-spectrum CBD oils, because they are rich in terpenes, can have a wide range of effects depending upon the strain of hemp flower from which they were produced.

Full-spectrum CBD oils might be your best choice if you’re trying to treat a specific condition such as anxiety or sleeplessness — that is, assuming you find a CBD product with the right combination of terpenes to produce the effects you’re hoping to achieve.

When shopping for full-spectrum CBD oils you need to know which terpenes were produced in the strain from which it came, and how much of each ended up in the final product.

So how do you tell which terpenes are found in a full-spectrum CBD oil? Most manufacturers will provide a lab report that shows exactly which terpenes and cannabinoids are present and in what ratios. If there’s no lab report, you should steer clear of the product.

And, as with full-spectrum products, you should not purchase a broad-spectrum product unless you know that the terpenes used in the formula will produce the desired effects.

Oftentimes, broad-spectrum products will list the specific terpenes being used in the product both on the front of the label and in the ingredients.

If you’re not using CBD for a particular condition, but rather using it as a dietary supplement for everyday use, then you should consider a product that contains only purified CBD and no terpenes.

Furthermore, if you’re using a topical product such as a CBD-infused skin lotion, muscle cream, or other kinds of ointments, balms, or salves, and you don’t want to smell like cannabis, then CBD-infused products are for you.

Another factor to consider is that some people are sensitive to certain terpenes. They can have unwanted side effects. If you buy a product with terpenes and it causes allergic reactions, then you should switch to pure CBD-infused product with no terpenes.

Which product is right for you?

If the choice were simply between which type of CBD oil to purchase, the choice would be fairly easy. However, there are a multitude of other types of CBD products besides oils such as tinctures, edibles, inhalers, vape pens, patches, topicals, etc.

So how do you know which of these delivery methods is right for you?

There are two things to consider here. The first is how quickly you need the product to take effect, and the second is what you’re actually using it for.

For people dealing with sudden onset conditions such as anxiety and panic attacks, a product with a fast onset time is best. The products with the fastest onset times are vape pens and inhalers. Inhaled CBD produces effects almost instantly.

The CBD products with the second-fastest onset time are tinctures. Tinctures are drops that are used under the tongue where the CBD can absorb directly into the capillaries in your mouth.

Edible products have the slowest onset time but tend to have longer-lasting effects.

If you’re hoping CBD can help with digestive issues, then an edible product is best. And if you’re trying to remedy a skin issue or joint pain, then a topical product might be best.

What are the effects of terpenes in CBD oil?

And now for the final piece of the puzzle when shopping for CBD oil — specifically, which terpenes should you be looking for?

As we mentioned an array of terpenes can be found in or added to any CBD product, and it would be impossible to list them all in this space.

Your best bet is if the product contains terpenes not found in this list, then you should do some research to find out what its effects are. A quick Google search for a particular terpene will bring up abundant information on the terpene’s effects.

The five top terpenes found in cannabis are:

Let’s look at each of them separately.

What is pinene good for?

Pinene is the terpene that gives pine trees their characteristic scent. It’s also found in citrus fruits. Pinene is associated with greater concentration and focus. It’s also a powerful anti-inflammatory making it an ally for pain relief. Also, humans have been treating asthma with pinene for eons.

What is linalool good for?

Linalool has a flowery, lavender-like scent. Linalool is often used as an aid to relaxation and reduction of anxiety and stress making it a good sleep aid as well. It’s also a good topical pain reliever and anti-inflammatory.

What is myrcene good for?

Mango, hops, bay leaves, and eucalyptus all contain myrcene. Myrcene can help cannabinoids such as CBD to take effect more quickly and adds to psychological effects such as anxiety reduction. Myrcene is also known to have anti-inflammatory effects.

What is caryophyllene good for?

Caryophyllene is found in basils, cloves, and black pepper. It has a spicy aroma.  Caryophyllene is well known for its antioxidant, antiseptic, antibacterial, and antifungal, as well as anti-inflammatory properties.

What is limonene good for?

Limonene is what gives citrus fruits their distinctive odor and bitter taste. Limonene is an antifungal agent. It’s used in over-the-counter remedies for toenail fungus.

In conclusion, here are the important facts to take away from this article: