What is CBG (cannabigerol) 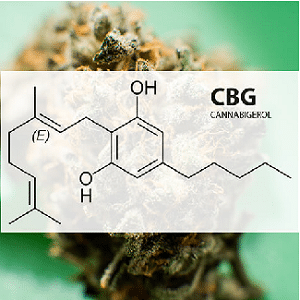 The two most commonly produced cannabinoids are cannabidiol (CBD) which is a non-intoxicating cannabinoid, and delta-9 tetrahydrocannabinol (THC) which is the cannabinoid found in marijuana that is responsible for its intoxicating effects.

Cannabis can also produce several other types of cannabinoids including CBG, CBN, CBC, and many more. Interestingly, CBG is a precursor to all known phytocannabinoids produced in cannabis. Immature hemp flowers only produce CBG. As the flower clusters mature, enzymes in the plant begin to convert CBG into other cannabinoids such as CBD or THC.

To be exact, cannabis plants naturally produce acidic versions of cannabinoids such as CBGA, CBDA, and THCA. Exposing these acidic cannabinoids to heat via smoking or cooking converts them into the non-acidic forms, CBG, CBD, and THC. (Interestingly, while THC is intoxicating, THCA found in raw cannabis flowers is not.)

In order to produce CBG oil or CBG isolate, hemp flowers must be harvested before CBG is converted into CBD or other cannabinoids. There are today several strains of hemp, such as Jack Frost and White CBG, that produce very low quantities of the enzymes needed to convert CBG into CBD. Generally, CBG oil and CBG isolate are extracted and refined from these high-CBG strains.

Why choose CBG oil or isolate over CBD?

The medical properties of CBG and CBD are very similar. Both are non-intoxicating and non-addictive. However, there are some differences. And because cannabinoids affect each individual differently,  the differences between certain cannabinoids might be further amplified in certain users.

Like CBD, CBG is valued for its anti-inflammatory, antioxidant, and anxiolytic effects. However, some experts suggest that CBG might be more effective than CBD at treating certain conditions in some users.

More information on the specific medicinal effects of CBG can easily be found online.

Any products that can be made with CBD can also be made with CBG. This includes dried hemp flower for smoking, cooking, or vaping, as well as CBG tinctures, CBG oil capsules, CBG edibles, CBG creams, and more.