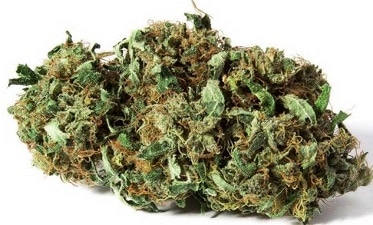 Watermelon Haze is a result of crossing Watermelon, a strong Indica dominant strain, with an unknown phenotype of Haze. Though Watermelon Haze closely resembles its parent watermelon especially in effects, it is different in that it has earth, piney taste which may give an indication of its other parent.

Watermelon Haze will give you a light, fruity smoke with tropical undertones. It is a very pleasant smoke for users who do not tolerate the more dank diesely flavors of most other CBD strains. As it is not 100% free of the dank, a vape will substantially minimize the gasoline aftertaste to keep the smoke light and sweet and mild. Watermelon Haze buds have minty green nugs with brilliant orange hairs, and a frosty coating of white crystal trichomes

Watermelon Haze takes a bit of a while to take effect, you might even think that it is not working on you. Then slowly, a subtle but noticeable pleasant clarity will come over your mind, consuming your cognition and removing any mental clutter to give you tranquil calm. Slowly, this calmness will radiate through the rest of your body to wash away all your tension, fatigue and pressure, leaving you in a state of complete relaxation that will slow down your breathing. With this profound relaxation, you are very likely to doze off into dep slumber.

The particular effect of Watermelon Haze is that it will give you completely rested sleep without a racing subconscious mind or restlessness that will have you waking up to complete restfulness and freshness to start a new day.

It is thus best taken at night.

Watermelon Haze is a result of crossing Watermelon, a strong Indica dominant strain, with an unknown phenotype of Haze

Terpenes are essential building blocks of complex plant hormones and molecules, pigments, sterols and even cannabinoids.

Complex plants have essential building blocks consisting of hormones, pigments, molecules, sterols and sometimes even cannabinoids. These are referred to as terpenes and they give the plants their signature scents. Part of the therapy of a smoke is the actual smell of the strain, but most of it is the specific characteristics each terpene possesses.

Watermelon Haze has the following terpenes in their order of abundance:

Found most abundantly in Watermelon Haze, this terpene has properties that activate the endocannabinoid system. It also has potent anti-inflammatory effects.

With a musky, earthy smell, this terpene has great entourage effects, which enhance the action of the other terpenes as well. Further to this, it is also a strong anti-inflammatory, antibiotic, and antimutagenic agent.

This terpene gives Watermelon Haze its tropically scent. It is known as tonic for bacteria and fungi, and is great for the alleviation of stress and anxiety.

Humulene is known for its anti-inflammatory benefits. As it also suppresses appetite, it has been used by generations in Chinese medicine to aid in the loss of weight.