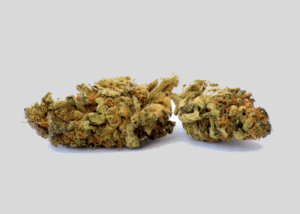 Carmagnola is a variety of hemp that is Indica Dominant with a 20/80 ratio of Sativa to Indica. Its CBD ranges between 6-9% and it generally has less than 0.2% THC. This world famous hemp grows in the Italian town of Carmagnola, hence its name. It is even suggested that it is the mother of various high CBD European strains.

Carmagnola, like most high indica strains, is believed to have one of the richest quantities of cannabinoids globally making it a fast favorite, even though it has been around for centuries. Initially, it was famed for its great production of hemp fiber and hemp seeds, but with the current demand for CBD, this has become the reason why it is grown.

The fragrance of Carmagnola is fruity, with a mix of creamy citrus. Its flavor is herbal and earthy with tart, citrusy undertones. It has chunky dense dark green buds which have an abundance of sticky resin. When broken apart and combusted, the earthiness becomes more pronounced.

It will give you a smooth, fresh smoke whose effects are a bit slow to kick in but very effective. You will experience a mellow buzz and a profound sense of relaxation, leaving you happy and contented. Your mind will become focused and any mental clutter will disappear.

This strain though being highly indica dominant is not known to give one couch lock, however, the deep relaxation might induce one to drift off to slumber land.  This strain is also prone to give you the munchies, so ensure you have something to eat at hand.

Both the high Indica and CBD content of this strain make it excellent in therapeutic use. The overall effect helps one unwind and de-stress.

This is definitely a strain that is easy to grow, easy to smoke and also easy to get a hold of.

Carmagnola is an Indica dominant CBD strain which has an 80/20 Indica to Sativa ratio.  It has 6-9% CBD and less than 0.2% THC content.

Carmagnola is an Indica dominant CBD strain which has an 80/20 Indica to Sativa ratio.  It has 6-9% CBD and less than 0.2% THC content.

Originating from the town of Carmagola, which is about 18 miles from Turin, Carmagnola is a parent strain that has been around for centuries.

Terpenes are elements that are found abundantly in herbs and plants that give them their characteristic smell and characteristics.

Carmagnola has an abundance of terpenes, but we’ll mention the most abundant:

Limonene: This is the terpene that gives Carmagnola is signature citrusy scentand taste. It is known to aid the action of other terpenes as well as suppress the growth of a myriad of fungi and bacteria. It has also been studied for its benefits as an antioxidant, anti-inflammatory, anticancer, and also heart health agent..

Myrcene: This terpene possesses musky, earthy, herbal tones and is known to have strong medicinal properties. Not only does it also have the entourage effect on other terpenes, enabling them to be more potent, it also has notable antibiotic, antimutagenic, anti-inflammatory and antibiotic properties.

Linalool: This terpene has both relaxing and calming benefits.

Pinene:  This terpene is a very effective bronchodilator, allowing more oxygen to get into the lungs. It also helps in treating pain, anxiety and depression