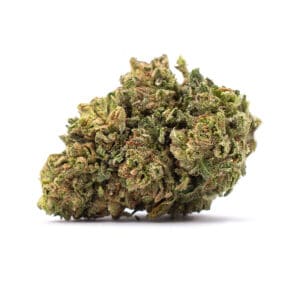 Bubba strains are among the most robust strains that you will find out there, and Bubba Remedy is not an exception. It is a cross between Bubba Kush and Remedy strain; a combination of robustness with therapeutic goodness. This strain is Indica- leaning and offers calm focus with a mellow vibe that’s great for wrapping up the day.

Being a hemp strain with less than 0.3% THC, this strain will not throw you into an abyss, everything comes in moderation including the cerebral stimulation. However, the THC is sufficient enough to promote full entourage effects. Most users prefer using this strain in the evening when they need to heal from burn out.

Bubba Remedy is a beautiful strain that features deep and light greens, and bright orange hues that are topped with a silvery appearance that is most prominent in the morning. The leaves are broad and tapered while the buds take a conical appearance that is broad at the base. The colas grow large and dense as they approach harvest and will be coated with a sticky layer of resin glands.

Bubba Remedy has a herbal or earthy aroma with a mix of tropical and sour undertones. When the nugs are burnt they produce a rich smoke that is gentle and tasty. Users have compared the tatse to chewing on saw dust. Once the smoke is exhaled it leaves behind a sweet taste like that of fresh tangerines. It is on the rare occasion that this strain induces coughing bouts.

The original creators of Bubba Remedy are unclear. However, the strain is a cross between Bubba Kush and Remedy strains.

Myrcene is also referred to as the couch-lock terpene. It is abundant in most Indica strains and is associated with sleep-inducing properties. It has a strong herbal, earthy, or skunk-like aroma. Studies have shown that this terpene has sedative and anti-inflammatory properties.

Limonene is abundant in this strain and provides the citrus aroma. This terpenes is commonly used in aroma therapy because it has mood- uplifting effects.

Caryophyllene is both spicy and sour. You will find this terp in black pepper and other spices such as basil, oregano, and rosemary. This is the only terpene that binds to endocannabinoid receptors. It facilitates the action of the other cannabinoids in the body.