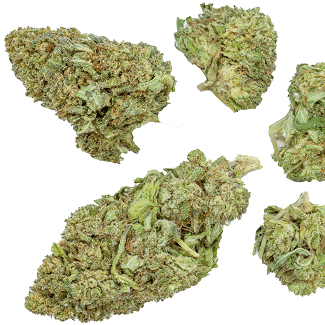 Bubba Kush is a hemp variety of that is widely known for its relaxing properties. With a high cannabidiol (CBD) content this strain is beloved for its therapeutic benefits without an accompanying sense of euphoria.

The buds of this strain are richly colored in deep green and hues with a sprinkle of orange colored bedazzling pistils. The aroma is even more enticing for cannabis lovers; a rich earthy scent with the unmistakable presence of myrcene.

Bubba Kush is a hemp hybrid strain that was created by Sovereign Fields. Details of its exact parentage are sketchy. However, it is clear that this indica leaning strain has strong Kush genetics. Being a legit hemp strain it contains less than 0.3% THC and a CBD content of about 14%. This strain is largely grown in Oregon.

Bubba Kush has string tranquilizing effects that set in a few hours after ingesting infused edibles. Users have turned to this strain when they need to catch a break from overwhelming life events. The sedative effects are the kind to knock you out for hours.

The appearance is breathtaking especially if you are drawn by the presence of anthocyanin in hemp. The nugs have a predominance of dark purple hues that are intertwined with electric orange veins to create a captivating look.

Many users claim that this strain is built for ultimate relaxation. Even small amounts will lift physical tension and create a strong sense of calm around you. The feeling of relaxation spreads throughout the muscles and entire body before causing sedation.

The taste is first earthy but later translates to subtle sweetness. New users are able to tolerate this strain because of the sweet notes. Make sure to properly cure the nugs to prevent any harsh or acrid flavors. Also remember to use a grinder when breaking the nugs because they are dense and sticky.

Bubba Kush is an indica leaning hybrid strain with 70% indica and 30% sativa. It contains 18-0.3% THC and 14% CBD. However, there is some controversy surrounding the sativa/indica ratios with some sources claiming that the balanced effects indicate a closer ratio.

The exact lineage of Bubba Kush is unknown. It is believed that this strain originates from an earlier version of the same strain.

This strain is rich in terpenes that include: